A Role Model From The Hunger Games

Busy week. The big chore was a profile and drawing, both of mega-structure architect Paolo Soleri, for Zenith City Weekly. When I started this series, I thought I could pull the profiles out of my skull. They all take research.

Last weekend, Sam and Marissa took us to the opening of The Hunger Games. Directed by Gary Ross (Pleasantville, Sea Biscuit), based on the novel by Suzanne Collins, HG is set in a dystopian future US, in which the dominant Capital exact tribute from its twelve provinces in the form of twenty-four teenagers who battle to the death of all but one on television. Jennifer Lawrence carries the show as the identity figure, with Josh Hutcherson as co-fighter and love interest. Elizabeth Banks, Stanley Tucci, Donald Sutherland, and, especially, Woody Harrelson lead a strong chorus.

The Capital is all flamboyant manners, contrasted with a Dorothea Lange grittiness in the provinces.

Dystopia seems appropriate now, a reaction to our current peril, but I couldn't detect a justifying glimmer of the society I know in this film (or in the book). Nor could I trace a path from now to the world of HG.  I see two opposing points of view as possible foundations for an honest dystopia.

One is currently dominant, growing out of the 2008 recession and weak recovery, and Tea Party populism. In this view, taxation and regulation limit the engines of progress, that is capitalism, industry and technology. This imnpoverishes society and threatens a becoming human existence. Probably it threatens civilization.

In the other view, materialism mistakes capital for income, sees 20th century ingenuity at consuming capital as technological triumph over scarcity, and demands more in the face of overshot limits.

Maybe that's a little too deep. HG is a bagatelle, and taking a position on the economic controversy of our time might limit its greatest virtue. There were three little girls in front of us, two sisters and a friend, escorted by the sisters' father. The younger sister was probably eight, the friend and the older sister may have been eleven. They had all read the book, in fact they had read the entire trilogy,  and were excited to see the film. Jennifer Lawrence's character is steadfast, strong, self-sacrificing, competent, kind, moral, and (begrudgingly) flexible. She's a real heroine.

The closest comparable action hero Barbara and I could think of was Ripley in the Alien movies, which weren't made for girls of tender years. The girls in front of us and their generation have an advantage none of their older sisters did.
Posted by Tom Roark at 11:47 AM No comments: 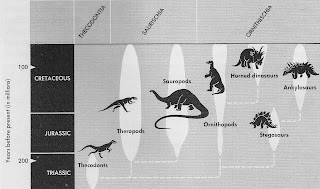 I've been thinking that the bell curve is a poor tool for communicating the problem of peak oil. It contains the information we need -- the volume of the planet's oil reserves, and whether we can expect to have more or less of it as we move along the curve -- but that's the area under the curve, and my habit, cultivated when Mr. Wassisname showed me how to graph mathematical functions, is to look at the line on the paper.

A graph like the one above would be more effective. If I were a citizen of the Jurassic Period, trying to plan an economy dependent upon the size of the dinosaur herd, this would give me a better intuitive understanding than the same information displayed as bell curves.

Me and all the other Alley Oops have our caveman enterprises in the dinosaur economy. I want to try something new and stegosaur-dependent in the late Jurassic. If I want to count on enough stegosaurs, I'll have to count on several business failures among the other stego-businesses.
Posted by Tom Roark at 12:47 PM No comments: