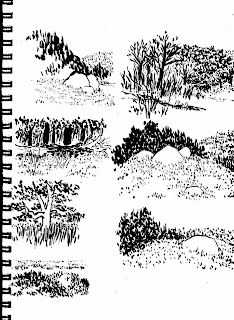 John C. Calhoun died of tuberculosis in 1850. TB was shown to be contagious in 1869, and the responsible bacterium identified in 1882. Quarantining infected people reduced the incidence of the disease, and a vaccine was first used on humans in 1921. Streptomycin, developed in 1944, and subsequent antibiotics, Isoniazid and Rifampin improved results and hastened recovery.

Calhoun said, "I hold then, that there never has yet existed a wealthy and civilized society in which one portion of the community did not, in point of fact, live on the labor of the other." Six years after his death, Edwin Drake drilled the first oil well near Titusville, Pennsylvania. In the subsequent century and a half, fossil wealth, and the technology it allowed, more than replaced the emancipated slaves.  High quality fuels and powerful technology have fed more people, made more comfortable, and spared more from disease than Calhoun could have imagined. We can condescendingly understand his apology for slavery as coming from someone without our advantages.

And yet, at this moment of peak human wealth, some of us still live on the labor of others, people starve, and we foul our planetary nest. Frightening, when you think that we are near the limits of growth, and must soon do better with less. Absent an unprecedented technological save -- or saves -- we can expect relative impoverishment, post peak. We can't bathe in the same river twice, so slavery as Calhoun understood it probably isn't in our future, but we must anticipate that decreased wealth will tempt us, or our descendants, to thrive at each other's expense, and plan to avoid it.
Posted by Tom Roark at 3:58 PM No comments: 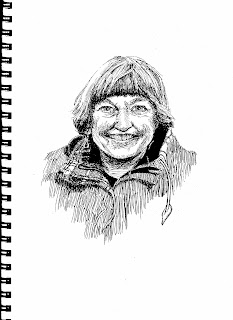 Your paradigm is so intrinsic to your mental process that you are hardly aware of its existence, until you try to communicate with someone with a different paradigm.

Donella Meadows lived from 1941 until 2001. She studied Chemistry as an undergraduate at Carleton College, and received a doctorate in Biophysics from Harvard. She went as a researcher to MIT, and worked there with Jay Forrester, the inventor of magnetic data storage, in the early days of computer modeling.

In 1972, Meadows published the book The Limits to Growth with her husband, Dennis Meadows, as well as Jorgen Randers and William Behrens. The book was a report to a private group, the Club of Rome, that is interested in challenges facing all of humanity. Limits modeled the consequences of a rapidly growing world population using finite resources, and predicted economic behavior.

Limits' conclusions indicated that humanity's situation is perilous. It has been criticized by commentators of widely ranging sincerity and understanding, and twenty- and thirty-year updates have been published.

The thing to take away from Limits and from Donella Meadows, though, is a way of thinking. For instance, predicting how long a resource, say oil, will last takes more than just dividing known reserves by barrels per year. Modelers need to predict discoveries of new reserves, relative difficulty of getting existing and predicted reserves, increases in population and industrialization, and changes in consumption due to new technologies. Good citizenship may not require fluency with modeling these variables, but it does demand that we know they are there and how they interact.

Meadows' Places to Intervene in a System is probably her best know paper (about two thousand words). It is available as a PDF at http://www.sustainer.org/?page_id=106,

in the Winter, 1997 Whole Earth Review, in her posthumous book Thinking in Systems: A Primer, and outlined at Wikipedia. She wrote a syndicated column, Voice of a Global Citizen, which is archived at http://www.sustainer.org/dhm_archive/.
Posted by Tom Roark at 5:55 PM No comments: 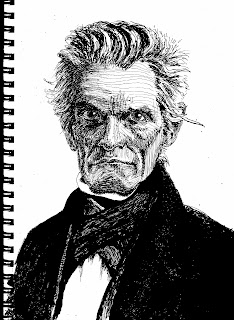 I hold that in the present state of civilization, where two races of different origin, and distinguished by color, and other physical differences, as well as intellectual, are brought together, the relation now existing in the slaveholding States between the two, is, instead of an evil, a good—a positive good.

I hold then, that there never has yet existed a wealthy and civilized society in which one portion of the community did not, in point of fact, live on the labor of the other.


I wanted to begin this post with something like "John Caldwell Calhoun is my favorite villain from American history, villain because he believed that slavery was a positive good, favorite because he understood, unlike most of his contemporaries and ours, that the wealthy always live on the labor of others." Calhoun was deeper than a simple-minded cracker insisting on racial prerogatives.

Calhoun lived from 1782 until 1850. (Delegates to the Continental Congress signed the Declaration of Independence in 1776, and Cornwallis surrendered in 1781, but British troops remained in America until late in 1783. The War between the States began in 1861.) He represented South Carolina's 6th District in Congress from 1811 until 1817, served as Monroe's Secretary of War, Vice President for Presidents John Quincy Adams and Andrew Jackson, and as Senator from South Carolina from 1832 until 1843, and then from 1845 until his death. He was also John Tyler's Secretary of State, was eager for the War of 1812, and founded the Bureau of Indian Affairs.

Although he was only born late in the Revolution, we can see Calhoun as one of the founders. He began as a nationalist and advocated for public works like roads, canals, harbors, and for a national bank, and for tariffs to pay for improvements, and to protect the nation's infant economy. As the country grew, he came to see these same institutions enriching the northern states at the expense of the South. His mature positions -- nullification, concurrent majority, and expansion -- come from a need to defend his home. In the same 1837 speech I've quoted, Calhoun says apparently without irony, "...encroachments must be met at the beginning, and that those who act on the opposite principle are prepared to become slaves." He's speaking specifically about abolition -- although the hypothetical slaves mentioned would be southern planters. But abolition is a just a special case of federal policy designed to favor the North.

Calhoun seems to have believed, with evidence, that humans will seek their individual survival and advantage, at each others costs, and that our duty is to protect ourselves. Defense requires security and resources seized from other hands.
Posted by Tom Roark at 9:51 AM No comments: 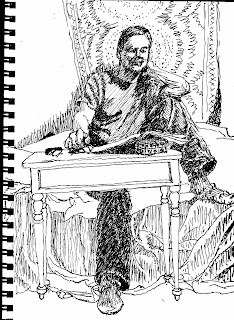 My live drawing has been in a slump. It's been hard for me to keep my proportions straight, and it's mystified me. I thought I knew how to do this. When this drawing started coming together Monday, it was like the spell had broken.

Thinking about James Lovelock, after drawing his portrait a few days ago, I kept remembering his notion that we're experiencing a Gaian immune response, and before too long those of us still on the scene will be too busy surviving to do much else -- like draw pictures or blog about them. Lovelock thinks that climate change due to increased atmospheric carbon dioxide levels, and positive feedbacks like methane released from thawed permafrost have gone too far for civilization to continue as we know it.

I'd misplaced my copy of Lovelock's 1979 Gaia: A New Look at Life on Earth, so I refreshed my memory by noodling around on line. Among other things, I found this video:

Lovelock's 90, so I cross my fingers and hope that his pessimism is an instance of the world's seeming old to an old man.
Posted by Tom Roark at 2:17 PM No comments: 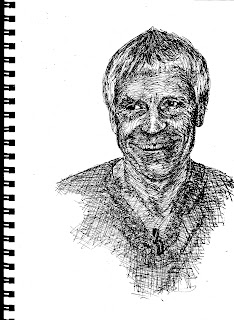 We cannot turn back the clock or return to any prior state on the planet, but we will never know ourselves until we know where we are on the land. There is no reason we cannot build an exquisitely designed economy that matches biology in its diversity and integrates complexity rather than extinguishing it.

Paul Hawken was born in California in 1946, and attended UC Berkely  and San Francisco State without taking a degree. He was active in the civil rights movement of the 1960s, and was Martin Luther King's press coordinator for the Selma march, and staff photographer for the Congress of Racial Equality in Louisiana.

Hawken turned a Boston health food store into a national natural foods brand, Erewhon Foods, and co-founded Smith & Hawken, manufacturer of quality garden tools. These days he heads One Sun LLC, an energy company that works with biomimicry, and Highwater Global, an equity fund that invests in companies working to solve environmental challenges. He is the author of a number of books, including The Next Economy, which came out of essays about economics written in the mid-eighties for CoEvolution Quarterly and interviews with Stewart Brand. Other titles include Natural Capitalism, How to Grow a Business, and The Ecology of Commerce. He has collaborated with Amory and Hunter Lovins of the Rocky Mountain Institute.

Paul Hawken's current book is Blessed Unrest: How the Largest Social Movement in History is Restoring Grace, Justice, and Beauty to the World. Blessed Unrest describes a movement made of thousands or millions of non-profits acting for the environment, the rights of indigenous peoples, and social justice. It describes this movement as a worldwide social immune system. 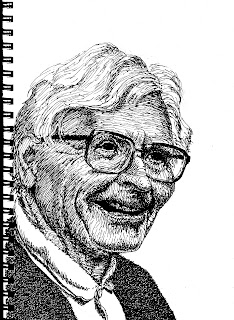 I realized it was life that looked after the climate and the atmosphere.

James Lovelock was born in 1919 in the English county of Hertfordshire. He was a conscientious objector at the beginning of World War II, but Nazi atrocities convinced him to enlist. The military turned him down because he was engaged in medical research. He is the inventor of the electron capture detector, which can detect CFCs or pesticides in quantities as low a one part per trillion.

In the 1960s Lovelock was working for NASA, developing ways to detect life on other planets. He reasoned that chemical reactions would have stopped in the atmospheres of planets without life. This is the case on Mars and Venus, planets NASA thought might have life. Earth has lots of reactions in the atmosphere. For instance, methane and oxygen are constantly reacting in the air. But the composition of our atmosphere remains constant.

This was the beginning of Lovelock's "Gaia Hypothesis." (Say Guy-uh) Gases like oxygen and methane come from living things, so living things must be regulating their relative amounts. Beyond this, the Gaia Hypothesis says that life actively controls the temperature and composition of the Earth's atmosphere, and other parts of the Earth's surface. If the temperature or the atmospheric composition is disturbed, life will correct it by changes in the ecosystem. The climate, the air, the rocks, the ocean, and life are a single system.
Posted by Tom Roark at 3:40 PM No comments: