Is The Tea Party Racist? 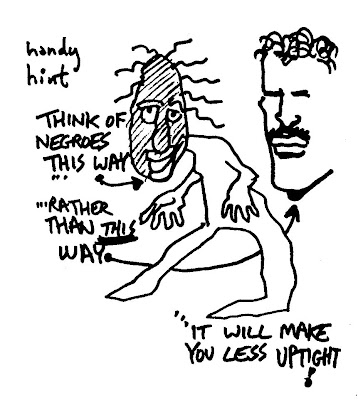 Art Spiegelman (Maus, ﻿In the Shadow of No Towers﻿) sketchbook page, circa 1973.

Barbara and I delivered together yesterday, 265 miles, the longest route yet. We saw two things. The first was a jogger, white guy, early middle age, no shirt, burn over deep tan. A little later we saw a billboard: "Tired of hope and Change?" Picture of a man from the shoulders down -- navy blue suit -- shredding the Constitution. The man's hand was so dark I couldn't tell it from the suit.

"Mabel, call the model agency. I need somebody else for the Obama billboard. No, he was a nice enough guy, but that jogger in shipping is darker than he was. Have them send over a real jigaboo this time. No, don't say it that way. Be, you know, 'politically correct.' People have to know it's Obama. PhotoShop? What's that?"
Posted by Tom Roark at 9:40 AM No comments:

Theory Of This Moment In History 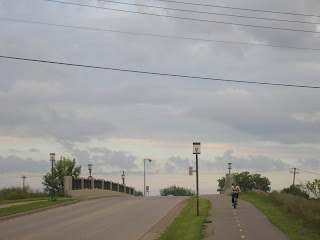 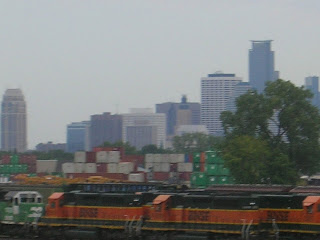 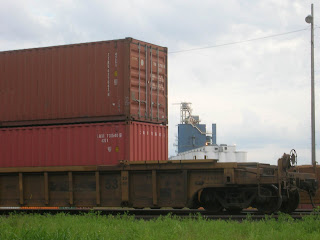 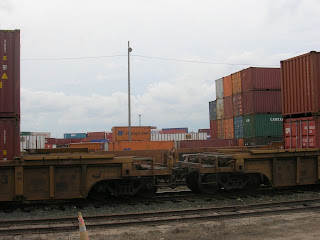 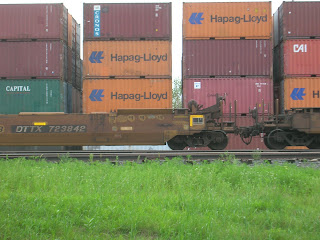 Northeast Minneapolis is the big-shouldered part of town, where rail yards rub shoulders with supper clubs, the homes of  hard-working, no-nonsense Slavs, and oddly enough artist's studios and galleries. I went there earlier this evening to take photos for what follows, and wound up feeling Antonionesque.

The organization of various empires shortly after that, and the institution of various religions observed today, between 1000BCE, and the Common Era, indicates that societies had wealth they could divert from survival to the propagation of their existential points of view.

Societies adapt to circumstances, and their adaptations are complex and linked. Pull one lever, and pull all the levers that help it do its job and the ones that it’s supposed to help. While circumstances remain the same, this is good; when circumstances change, societies find it difficult to adapt, because the necessary changes interfere with adaptations to adaptations, and the members are reluctant to allow what looks like chaos and loss. Consequently, with the stakes never higher, societies find it nearly impossible to intervene in the most effective of systems theorist Donella Meadow’s ten places to intervene in a system (paradigms), and settle for the easiest (numbers). Rome began to evacuate Britain in 383 CE, and civiliztion napped, albeit uncomfortably, for the next four hundred years. Then Charlemagne began consolidating a Frankish Empire.

Around a thousand years ago, European frontier outposts became the cities that we know, and the capitals began large public works like bridges. Coincidentally, this was about when India began using zero as a place holder in computation.

In the mid-fourteenth century, the Black Death reduced world population by about a fifth (and Europe’s by up to 60%). There is modern speculation that the smaller population’s lowered need for combustion contributed to a global cooling called the “Little Ice Age” in the fifteenth and sixteenth centuries. In spite of the population crisis and the cold, the Little Ice Age hosted the Renaissance, a time of artistic flowering, technological innovation (streetlights, movable type, firearms), and European global exploration.

European colonization of the globe, particularly the Americas, increased its wealth, not so much by allowing Europe to import materials, but by giving it new, sparsely settled continents into which its population could expand. (This is definitely a Euro-centric narrative, partly because European-American history is what I know, but mostly because Europe and America have been the dynamic, if not always wise, actors in the globalization of the last half millennium.)

European deforestation forced a switch from charcoal to the higher quality -- but more difficult to produce -- fuel, coal, in the early to mid-eighteenth century. This began the Industrial Revolution.

The nineteenth century was a period of feverish technological innovation, one innovation being the oil well in 1856. Oil is a higher quality fuel than coal, and allowed automobiles and flight.

Innovation continued through the twentieth century and persists, but much of the twentieth century’s gifts have cultivated a comprehensive and detailed understanding of ourselves, our world, and our place in the world, that contradicts both inherited and intuitive understandings (the periodic table, evolution versus Genesis, relativity and quantum physics versus Newton, connectedness versus reductionism).

We have not been perfect at providing for every human being, but in spite of a steep increase in the number of people, the twentieth century saw a higher percentage of human beings fed, and fed better, than ever before in history. Archeological evidence (Steven LeBlanc’s Constant Battles) also shows that it was a period of relative peace, measured by percentage of population to die violently, in spite of two world wars, various proxy wars, decolonization, and many civil wars and revolutions.  (Assuming 100 million deaths as the result of WWII and Stalinism together, this is four-point-something percent of the planet's 1940 population of 2.3 billion; contemporary stone age hunters lose a quarter of adult males, five percent of adult females, and some children to warfare; there are no noble savages.)Technological optimists believe that our science and engineering, such as hybrid grain, fertilizers, and pesticides, have been responsible. People ate, who otherwise wouldn’t have eaten, because of the Green Revolution, improvements in communication, manufacturing, transportation, and so on.

But it was the high-quality fuels that made the innovations possible, and that allow us to continue to use them. We turn oil into food, and we live at the culmination of more than one thousand years of economic expansion. We have walked on the Moon, and freed ourselves from smallpox. We wiped out smallpox! High quality fuels, and Europe’s increased carrying capacity, acquired by annexing the Americas and Australia, have given us prosperity, understanding, and luxury. Maybe we got a counter-intuitive boost from the plague, too.

We have filled the continents; there are no more frontiers. From now on, the high-quality fuels will become harder to get, and more harmful to use. You might say that we have converted coal and oil into food and knowledge. Now we confront the world’s carrying capacity for ourselves. Populations don’t survive confrontation with carrying capacity for long. Circumstances are changing, and we face collapse. Twenty-first century civilization is more complex and full of linkages than any of our extinct predecessors. It's never been harder to do the right thing. Each of us has more to lose, understanding requires tough intellectual work, and there's an attitude at large that we have an existential right to believe any dumb thing we want to.

Progress must continue;  I think something in our character demands it; but progress must be in finding ways to mimic the relationships we witness in nature, and in linking with them. The wealth that will allow us to continue will come from ways that our genius can use those relationships without damaging the whole, not from appropriating and squandering irreplaceable fossil capital. Everyone’s life will change, yours and mine painfully. It will be better. For the first time in billions of years of life, a species with full understanding will fill its ecological niche, one that it designed! (The paradox or irony is merely apparent; our new complexity would be increasingly aligned with the broadest and most enduring system known.)

And we get bragging points for doing what none (USSR, Czechoslovakia, and South Africa have made essays at it) have done: changing our society's basic paradigms.
Posted by Tom Roark at 11:45 PM No comments: