The Driveway Is Coated 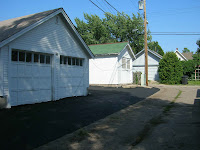 I would have gotten the seal coat on in a solid five hours. Unfortunately the block of time had a two-hour crack in the middle. Once again I’d underestimated how much material I’d need, and went back to the suburban big box for three buckets of sealer. I would have rather gone to River-Lake Hardware, two local guys who’ve been at the same address on East Lake Street since before Barbara and I hit town. They were the ones who sent me to the ‘burbs, and I have to admit that stocking as much petroleum product as I used (twenty-four gallons of asphalt and additives in various proportions) would take too much space in that little, old-fashioned hardware store.

The numbers favor shopping locally when you can. The 3/50 Project says that sixty-eight bucks out of every hundred spent stay in the community when you spend locally, but only forty-three when you buy from a national chain. Beyond that, I’d say that keeping the local economy healthy has other advantages. Multiple local competitors mean you’re not at the mercy of a home office that might mothball a store that wasn’t sending enough cash back home. One store out of many closes, and you can shop across the street; the local big box shuts and supplying your project or dressing your kids gets more involved. Family businesses model commerce for children. Once, long ago, I read that millionaires were more likely to have been the children of family businesses, restaurants, taxicabs, etc. Not that I approve of concentrated wealth, but we’re a commercial species, and business is an art.

Barbara had taken the car, so I got on the train, grabbed the care, and picked up three more buckets of seal coat. I almost got it all covered with two, but had to grudgingly pry open the last pail for less than ten square feet.

In a can’t-learn-less moment, I saw that the salt I’d put in some of the cracks had risen through the tar to whiten spots on my clean, flat, black surface. I have a couple of other reservations about my job, but they’re more like questions. I’m pleased and curious to see how the driveway fares this winter.

And Barbara told me I’m brave.
Posted by Tom Roark at 8:55 PM

MN Landscape Arboretum recently? WCCO is in Nevis, right? I enjoy their Going to the Lake series.chain link fence supplies