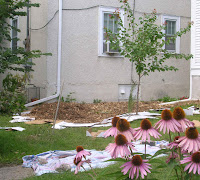 Two or three problems cropped up over the weekend.

* As I wrote, I became less doubtful that Stewart Brand is full of beans;

* Unfinished, it’s at twelve hundred words, and I promised myself to run less at the mouth.

Besides reading and writing, I picked grapes and juiced them. The amount of time growing my own food takes continues to amaze me. Call it research? Call it an investment in something that will get us through future desparation? Call it doubt.

Another chore was mulching Rain Garden One. A year ago, not understanding how water moves underground, I dug a swale below an apricot tree I wanted to water. I planted annual rye and clover, and got a mess. In an effort to get the mess off my desk, and spare my nice young neighbors my weed patch, I sheet mulched it.

The cardboard boxes that Jason and Barbara buy their almonds in lie flattened on the sod. On top of that go city wood chips. I’ve threaded the downspout from the roof under the cardboard. It remains to be seen if I will step on the pipe, or find it clogged with dirt, vegetation, and wood chips. Eventually -- maybe October -- I’ll dig a shallow trench and fill that with sand -- sort of an ad hoc cistern. Next year, the entire area gets herbaceous perennials. Who knows what. Eventually-eventually, there will be other swales here and there throughout the yard to hold onto water that currently runs NNE to SSW, and into the alley and storm sewer

(In the picture, we’re looking NW toward the next-door duplex. The little plant at the base of the apricot is prairie clover. We’re looking over purple coneflower, and I’m steadying the camera on the compost bin. The sheet on the ground nearby covers Babara’s drying onions. Some of the foliage at the left margin is the Haralson apple tree.)
Posted by Tom Roark at 2:02 PM